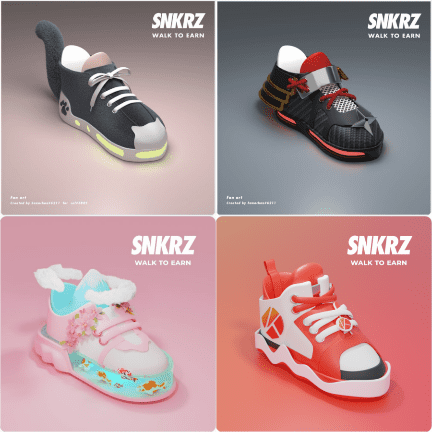 What is SNKRZ? With SNKRZEPN you’re just a few kilometers away from your money.

Blockchain-based web3 is popular these days.

Among them, the M2E service, which allows men and women of all ages to make money while protecting their interested health, is popular.

Currently, it is Stepn developed by an Australian fintech company that is leading this M2E service.

It comes out a lot in the news, and a lot of people are using this stepen to keep their health and make money.

This stepen is a system that gives cryptocurrency by measuring it with GPS when you buy NFT-type SNKRZ and walk or run outdoors while putting them in your smartphone.

To put it simply, it’s similar to providing cash points with a certain number of steps, such as the Cashwalk app and the Toss pedometer app.

many people are interested in them because they have various functions and advantages such as early entry compared to Stepn.

SNKRZ is a blockchain reward-based move-to-earn service that accumulates coins just by walking.

SNKRZ will receive a token reward every day if they walk or run with NFT shoes.

It is a service that allows you to make money through exercise like P2E (Play to Earn) that makes money while playing games.

It’s a system where you can make money by building talknomics with game elements.

The basic method is to purchase and own a SNKRZ NFT and to be rewarded by running at the speed appropriate for that SNKRZ NFT mode.

Depending on the number of SNKRZ holdings and the loyalty, additional stamina will be provided and compensated by walking or running.

Of course, even if there is no SNKRZ NFT, you can use the sticker app called “Basic Mode” and receive compensation.

However, compared to users with SNKRZ NFT, compensation such as the amount of cryptocurrency being mined is low, and withdrawals can be made by purchasing shoes or raising the level to cash in.

For those who are interested in SNKRZ NFT, many of you have experienced Stepn.

Basic systems are similar to SNKRZ and steppens. It is a similar system, with each ability, level-up, and repair durability after running.

But if you look at the SNKRZ white paper, there are characteristics that only the SNKRZ NFT have. Let’s talk about this one by one.

In the SNKRZ, there is Land, a metaverse space using a real map.

SNKRZ land is divided into 10,000 m^2 tiles (the size of Jamsil Baseball Stadium) and is constructed on the same map as the real world.

Users can own the land and each time a SNKRZ user walks on it, the owner of the land can be rewarded.

Land owners can induce users to visit through items, first-come, first-served events, and treasure hunt events, and expose their desired image to the land.

The most noticeable part is selling some of the land to corporate customers so that companies can advertise it, and land owners can also rent the land to companies and receive compensation.

It is not just a part of walking and running, but more diverse plays will be possible by adding game elements such as quests and attracting companies’ participation.

You can start the app and get various items through exercise, and you can buy or sell them through the market.

It includes a game-like element that uses trap or rocket items to gain stamina from other users, use drone items to receive additional rewards, or use shield items to defend against attacks.

In addition, SNKRZ users can discover quests while using the app and receive rewards through quests.

This quest can also be made available to land owners or companies for advertising purposes, increasing participants’ autonomy and driving enterprise engagement as described earlier.

Additionally, you can activate the mountain climbing mode and cycle mode.

In addition to simply walking or running, various activities are possible through the SNKRZ app because it supports cycle mode when riding the midnight street and hiking mode when hiking.

Before we learn more about the SNKRZ NFT, let’s first look at what M2E is and what it looks like.

The definition of M2E means making money through movement, and the recent method of M2E is a representative service that allows you to earn money through cashing after gaining coins while walking or running after purchasing NFT.

Simply put, M2E is a service that users make money by exercising.

Looking at the roadmap ofSNKRZ, beta-close testing is currently underway, and SNKRZ NFT minting, SNKRZ app opening, and token launch are scheduled for the second quarter of 2022.

For your information, SNKRZ are planned based on Clayton, and the possibility of multi-chain for various variables is open.

In the third quarter of 2022, a global expansion and offline running competition with M2E are planned, as well as collaboration between famous fashion brands and writers.

In the fourth quarter of 2022, the company plans to focus on global expansion by listing the tokens on domestic and foreign exchanges, establishing multi-chain such as Solana and BNB Network, and collaborating with overseas brands.

SNKRZ NFT shoes refer to NFTs, which are virtual shoes, not actual shoes.

It’s the only irreplaceable toe root in the world. You can think of them as your own shoes recorded on the blockchain.

Currently, several pictures of SNKRZ NFT shoes have been released on Twitter, and you can see that the design of the country’s representative shoes, from NFT to boxes, is very pretty.

I think it will play the same role as Stepn’s minting. There will be five grades: Normal, Rare, Epic, Unique, Legend.

SNKRZ currently have no minting schedule, and they are planning to conduct a close beta test against the testers around early May.

SNKRZ’ minting is planned to take place around May after the close beta test, and the price of SNKRZ NFT has been disclosed.

SNKRZ NFT Minting conducts minting by grade 3, and the price is differentiated.

Two per wallet means that only two can be minted in the wallet, and three per transaction can be purchased at once, so strategic minting should be done.

So far, the SNKRZ investment firm is Strong Ventures, and the partnership is Collabor Asia and KLAYDICE.

Storong Ventures is a famous domestic startup investment company such as Carrot Market, Kobiso, Hide, and Class101, and is an American company.

SNKRZ will be released in Korea first, but they are looking forward to entering the global market.

Collab Asia is a global MCN brand with more than 3,700 creators in the Asia-Pacific region.

Along with China’s Ellen & Brian Japan’s Junya, Korea’s Edward Avila, and John Lee, it has tens of millions of fans and is also looking forward to entering the Asian and Pacific markets.

Clay Dice is a game that utilizes dice in the Clayton ecosystem, as its name suggests, adding P2E elements to existing die-cast games.

I’m looking forward to the synergy effect of cooperating with SNKRZ.

Currently, Snickers NFT is conducting a close beta test for users selected from the community in advance, such as discode, ahead of its official launch and minting.

Only tester-selected users can install the app and use the SNKRZ app, which is loved and supported by test users due to its intuitive and clean UI and interface.